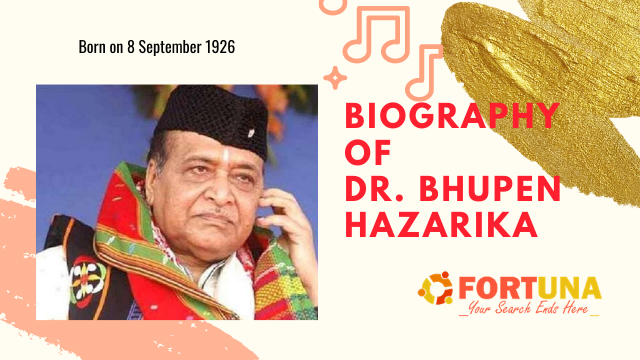 Who Is Bhupen Hazarika?

Bhupen Hazarika was born on 8 September 1926 in Sadiya, Assam. His father was Neelkanth Hazarika and his mother Shantipriya Hazarika. He was the eldest son of his ten children.
He did his early education from Guwahati, Dhubri and in 1940, Sonaram High School, he did his matriculation from Tezpur High School. In 1942, he completed his Intermediate Arts from Cotton College in 1944 and an M.A. in Political Science from Banaras Hindu University in 1946.

He then worked at All India Radio, Guwahati, where he obtained a scholarship from Columbia University, New York, and completed his Ph.D. In mass communication. He completed his doctoral degree on the thesaurus “Proposal for India’s Preparation of Basic Education to Use Audio-Visual Techniques in Adult Education”.
He also received a Bissell Fellowship from the University of Chicago, USA.
He was an exceptionally talented man. He was a poet, music composer, singer, actor, journalist, writer, and distinguished filmmaker. Let’s read about his early life, family, career, awards, and achievements.
He was the eldest of 10 siblings. Seeing his mother, he was inspired to sing. Bhupen’s childhood was spent in Guwahati. At the age of 10, he used to sing songs in the Assamese language.
Filmmaker Jyotiprasad Aggarwal heard his voice and liked him very much. In the year 1936, Bhupen recorded his first song in Kolkata.
Dr. Bhupen Hazarika sang two songs in Jyotiprasad’s film Indramalati. At the age of just 13, and which was Dr. Hazarika’s first written song. This was the kick start from where he started the journey of becoming a singer, composer, and lyricist started.
In the year 1942, Bhupen completed his studies from Art to Inter. After this, he did his MA at Banaras Hindu University.

How Was His Life After Study

After the completion of studies, Dr. Bhupen Hazarika started singing on All India Radio in Guwahati. With this, Hazarika used to translate Bengali songs into Hindi and give his voice. Dr.Hazarika had knowledge of many languages. With the passage of time, he started giving stage performances as well.
Once he went to Columbia University. He met Priyamvada Patel there. Both of them fell in love and both got married in 1950 in the US.
In 1952, their son was Tej Hazarika was born, he returned to India with his family in 1953 but they could not live together for a long period. He came to India and worked as a teacher at Guwahati University. He could not do the job of the teacher For a long time and gave the resign.
His wife Priyamvada left him because of the financial constraints. After this, Hazarika made music his companion. He gave songs in super hit films like ‘Rudali’, ‘Mil Gayi Manzil Mein’, ‘Saj’, ‘Darmiyaan’, ‘Gajgamini’, ‘Daman’ and ‘Why’. Hazarika wrote a thousand songs and 15 books in his life. Apart from this, he also produced the upcoming serial ‘Don’ on Star TV.
He was awarded the National Award in 1975 and the Dada Saheb Phalke Award in 1992, the highest award in the world of cinema, for his amazing contribution to the field of music.
Apart from this, he was honored with many prestigious awards like Asom Ratna in 2009 and Sangeet Natak Akademi Award in the same year, Padma Bhushan in 2011. His memorable songs are ‘Dil Hoon Hoon’ and ‘Joothi ​​Muthi Mitwa’.

He was born on 8 September 1926 in the Tinsukia district of Assam. Due to his evergreen songs, he was also known as ‘Bard of Brahmaputra’. Most of us have heard his lyrics in ‘Dil Hi To Hai’, one of the famous songs of the film Rudali.
There is no doubt that the song was sung so beautifully and it captured the entire film. It also made the audience shed tears. Let me tell you that he himself composed this song and also gave his voice.
His Date Birth Date:8 September 1926
Place of Birth: Sadiya a small town in Assam’s Tinsukia district.
Sun sign: Virgo zodiac
Father’s Name: Neelkanth Hazarika
Mother’s Name: Shantipriya Hazarika
Spouse: Priyam Hazarika
Children: Tej Hazarika

At Columbia University he was heavily influenced by Paul Robson, who was a civil rights activist and composed a song ‘Bistirno Parore’ which was based on the imagination and theme of Robson’s ‘OL Man River’.
At the third All-Assam Conference of IPTA, he served as the Secretary of the Reception Committee. At Gauhati University, he served as a teacher but after a few years, he quit his job and moved to Kolkata.
Later, he made several award-winning films like ‘Shakuntala Sur’, Pratidhwani. His directorial ventures include ‘Lati-Ghati’, ‘Chick Mick Bijuli’, ‘For the Sun Shine’ and ‘Mera Dharam Meri Maa’.
He composed lyrics and music for several Assamese and Bangla films including ‘Arop’, songs Chameli Memsab and e Shimna Perry.
His recent works include ‘Darmiyaan’, ‘Gaja Gamini’, ‘Daman: A Victim of Marital Violence’. Do you know which film he had as a playback singer? It was Hit Gandhi to Hitler.
How can we forget about his major contributions to Hindi cinema as music directors of some excellent films like ‘Arop’, ‘Ek Pal’, and ‘Rudali’? In 1993, he won the ‘Best Music Director National Award’ for the film Rudali.

His Awards and Honors

In 1960, the President’s Medal for his films was Shakuntala (1960), Pratidhwani (1964), and Lotigoti (1967).
From 1967-72, he was a member of the Assam Legislative Assembly.
In 1976, he received the National Award for Best Music Director for Jasmine Memsaab.
In 1977, he was awarded the Padma Shri.
In 1979, he won the Arunachal Pradesh Government, Gold Medal, for his contribution to tribal welfare and upliftment of tribal culture through cinema.
In 1987, Sangeet Natak Academy Award.
From 1999–2004, he was the president of the Sangeet Natak Akademi.
He was also a member of the Assam Film Development Council and the Central Board of Film Certification.
He was appointed as a member of the Prasar Bharati Board in 2003.
He received the prestigious Dadasaheb Phalke Award in 1992.
In 2001, he was awarded the Padma Bhushan.
In 2009, he received the Asom Ratna Award.
In 2012, posthumously, he was awarded the Padma Vibhushan.
Posthumously, in 2019, he was awarded the Bharat Ratna.
No doubt, he was a genius who played many roles in his real life as a playback singer, director, poet, composer, journalist, etc. He was a bright student in his time and served the film industry. Composing beautiful music, giving his precious voice, and directed films. He will always be remembered through his works and talent.

Dhola-Sodiya Bridge Named Upon Him

Road connectivity in the Northeast will see a major transformation with the country’s longest river bridge Dhola- Sadia bridge, which is named Bhupen Hazarika Sethu.

This new, three-lane, 9.15-kilometer bridge is built over the Lohit River, a tributary of the Brahmaputra, connecting Dhola in Assam to Sadia in Arunachal Pradesh.
The bridge will fill a huge connectivity gap present in the area. Till now, the only means of crossing the Brahmaputra at this place has been done by ferry only during day time, and even during floods, this is not possible. The last bridge over the Brahmaputra was the Kalia Bhamora Bridge at Tezpur.
It will however be replaced tomorrow with the Dhola-Sadia bridge, to be inaugurated by the PM, ensuring 24X7 connectivity between upper Assam and the eastern part of Arunachal Pradesh.
The bridge will also reduce the distance of 165 km from Mica / Roing on NH-37 in Assam to Rupai on NH-37 in Arunachal Pradesh in Assam. Travel time between the two places will be reduced from the current six hours to just one hour – a total reduction of five hours. This will save petrol and diesel worth Rs 10 lakh per day.
The Dhola-Sadia Bridge promises to usher in prosperity in the Northeast. This will provide efficient road connectivity for remote and backward areas which have poor road infrastructure.
The bridge will also give a major boost to the overall economic development of the Brahmaputra regions in Upper Assam and Arunachal Pradesh to the north. It will also cater to the strategic needs of the country in the border areas of Arunachal Pradesh, besides facilitating several upcoming hydroelectric projects in the state, as it is the most sought after route for various power project developers.
The total length of the Dhola-Sadia Bridge project, including the approach road on each side, is 28.50 km. The length of the bridge itself is 9.15 kilometers. It has been constructed on a BOT annuity basis at a total cost of Rs 2,056 crore as part of the Arunachal Package for Roads and Highways under the Ministry’s Specialized Road Development Program for the Northwest (SARDP-NE). Its purpose was to bring the people of Assam and Arunachal Pradesh closer to each other.

The List of Few Song Sang by Dr. Bhupen Hazarika